Behind the scenes at ParentMail: App developers (Part 1)

Posted by Scott Thompson | 5 years ago

As we celebrate over half a million downloads of our mobile App, we met with our App developers to find out why they think ParentMail’s App has been so successful.

First, a bit about them…

Graeme, our Android developer, had been working in the Education Sector for several years, building Apps for Android devices before joining ParentMail. “Previously I worked on Apps to improve communications between teachers and students, so I was really interested when I heard about ParentMail and thought it would be a good opportunity to work on something slightly different – creating an App for communications between school and parents.”

Christian, who has been our iOS App developer for over a year, previously worked in e-commerce building App’s for some big online retail brands! “I was really excited about building an iOS App for ParentMail as I saw a great opportunity to build something great from scratch and have a high degree of control over the product. We’ve an exciting vision for our App and I’m looking forward to being a part of that!”

“This App is a revolution in school to home communications and parents are excited about using the latest technology.”

We’ve seen over 500,000 App downloads already and received fantastic feedback from both schools and parents, so we asked Graeme and Christian why they think it’s been so successful:

Christian: School letters have been replaced with text messages and emails – which were great for a while, but the problem is you’re limited with the amount of characters you can use in a text and you can’t send attachments. Also, emails soon get lost in amongst all the other stuff  in your inbox, so again, good, but not great. Having school messages delivered in an App means there’s no way these important message, forms, appointments etc. can be lost and you’re not restricted by message length or not being able to send attachments.

Graeme: Parents want to be involved in what’s going on at school, so having all messages from their school instantly, is perfect.

“Mobile communications about their child when they can’t be with them – that’s exactly what parents want, isn’t it?”

Christian: An App like this is incredibly useful for a parent – being able to read school messages, reply to forms and pay for items all on your mobile makes life so much easier. I’m a parent myself and both my wife and I use the App to keep on top of all the things we need to for our school and nursery.

Graeme: It comes down to the fact that this App is revolutionising in school to home communications and parents are excited about using this latest technology. It’s also extremely easy to use, looks great and simplifies everything for parents.

Check back next week to see what else we asked the guys, including their future plans for the App and why they think it’s more popular than logging on to a desktop!

Don’t forget, the App is free for parents to download at schools using ParentMail, simply search “ParentMail” in the App store to begin using it. *Please note, parents must be registered with a PMX account before they can use the App. *

Want to know more about the ParentMail App or your own school branded App? Contact us today on 01733 595959 or email enquire@parentmail.co.uk for more information!

Celebrating 750,000 downloads of the ParentMail App! 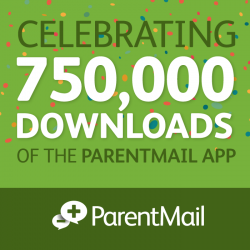 Never before have parents been bombarded with so much information. Whether it’s banking, shopping, social media, special offers, school and...

Behind the scenes at ParentMail: App Developers – Part 2

We met with our App developers last week to find out more about them and the success behind the ParentMail...